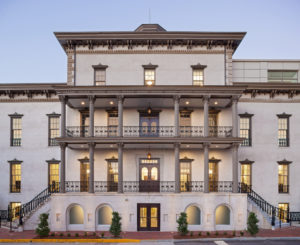 Take this self-guided tour developed by the American Institute of Architects Savannah Chapter right on your phone. Download the free app to access the GPS-led audio tour.

The tour celebrates the contribution of local architects to Savannah’s Historic District  a National Historic Landmark, designated in 1966, one of the largest in the country.

Local architecture firms’ award-winning restoration projects, such as the Savannah Law School (pictured above), are featured alongside contemporary residential buildings that stand in harmony with their historic neighbors in the city’s colonial-era squares. Also included in the tour are civic and government projects that introduced new architectural styles with buildings in the International and Modernist styles, from the 1970s to 1990s.

Download the free Geotourist app from the Apple and Google Play app stores to take the GPS-led tour on your smartphone.