A new digital audio tour, downloadable from the Geotourist app to visitors’ smartphones, will enhance the experience for visitors to the Japanese Garden – or Sha Raku En – at Cowden in Scotland, but the tour can also be listened to from anywhere in the world for free, via the Geotourist app or website.

The tour has been curated by The Japanese Garden, Cowden and has been produced in partnership with Geotourist, the revolutionary mobile platform and app for the world’s stories.

Created in its entirety during the UK lockdown period, the tour, when the garden was open, was used by visitors who visit the garden in pre-booked time slots to ensure that social distancing guidelines are met and adhered to.

The story of the Japanese Garden spans over a century

Nestled in the Ochil Hills, the Japanese Garden forms part of the Cowden Estate. The trail skirts the lake and explores other parts of the garden, as it explains how the garden was designed and created by Ella Christie, adventurer, explorer and visionary.

Travelling to Europe in her childhood, Ella became extremely adventurous following her father’s death in 1902 and journeyed to remote locations, including Kashmir, Tibet, Cuba, the Silk Road, China, Korea and Japan. 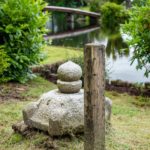 The garden at Cowden captures Ella’s vision and sense of discovery, with specialists, such as Taki Handa, brought from Japan to ensure that the details of the garden were in keeping with the principles of Japanese landscaping. Plants and shrubs were imported from Japan, along with several antique stone lanterns.

The garden was vandalised in the 1960s and remained closed and in a state of disrepair until 2014, when Ella’s great-niece, Sara Stewart, began a fund-raising campaign. The garden enjoyed its first full season in 2019.

The Geotourist trail of the Japanese Garden, Cowden, has been made possible by generous funding from the National Lottery Heritage Fund and Historic Environment Scotland.

Chairwoman of the The Japanese Garden, Cowden garden trust, Sara Stewart: “We are delighted that our 20th Century garden is being enjoyed by visitors now able to use innovative technology to learn about the surroundings and why a Japanese Garden was created in Clackmannanshire”.

CEO and Geotourist founder, Shaon Talukder, who created the Geotourist concept said: “We are thrilled to be the chosen provider for The Japanese Garden, Cowden – this is a spectacular garden and an example of painstaking application of the principles of Japanese gardening, situated in Scotland’s Ochil Hills coupled with the personal story of the family and esteemed Japanese garden experts responsible for bringing this attraction to life. The juxtaposition of the two landscapes is exception and is unique. This is one of our most important tour launches ever because of the story and demonstration of what is possible with imagination. The tour was agreed in the weeks before lockdown and has been created and produced remotely, showcasing the power of technology. We are conscious of the difficult times being reported across the tourism and travel industry and we are so very grateful that we are able to share positive news. “